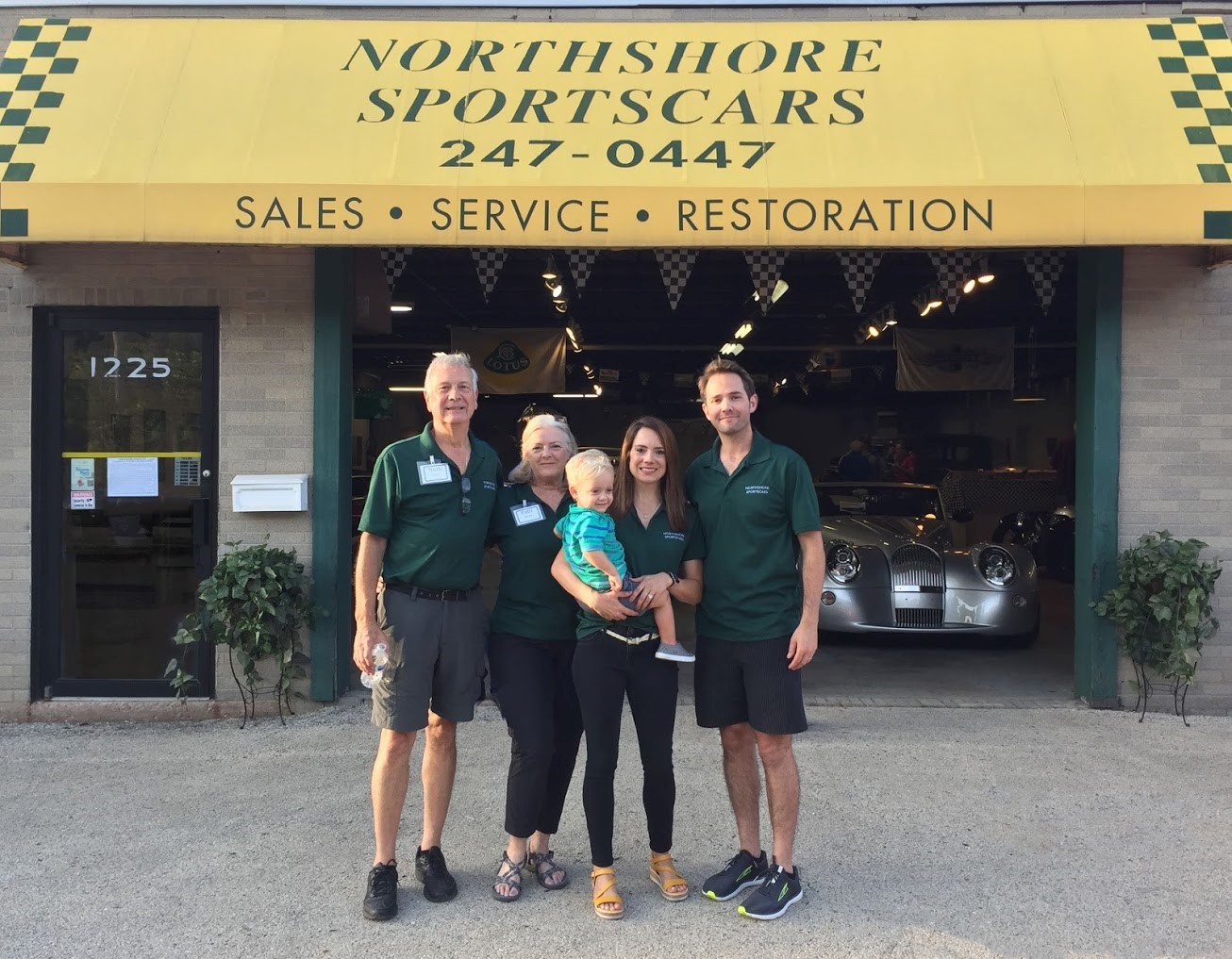 Northshore Sportscars is one of the few authorized Morgan Dealers in the United States and offers a handpicked selection of vintage British and European sports cars such as Classic Alfa Romeos, Austin Healeys, Jaguars, MGs, Mercedes, Morgan, Lotus, Triumphs, and Porsches. In addition to sales, service, restoration and consignment, they offer storage, appraisals, and specialty rentals.

Lake Forest/Lake Bluff Chamber of Commerce: What was your inspiration for launching Northshore Sportscars?
Norbert Bries: This started out as a hobby. My dad was a Ford dealer in Green Bay, Wisconsin, when I was a kid during Ford's high-performance period when Henry Ford III wanted to beat Enzo Ferrari at LeMans. They made some outstanding cars during that era, including the GT40, which did win LeMans. I opened this shop in 1989. I think you have to be in this business for the love of it. You're not going to make a lot of money in a niche market like this. But I'm making a living doing what I love.

My daughter Michelle Bries Nichols has come on board as our Vice President. She supports the company’s marketing strategy and everyday operations, and she'll be responsible for a full restoration of this old classic (business). Michelle has always shown a strong interest in and aptitude for this business. Her fresh insights and keen drive will help shape the future of Northshore Sportscars.

LFLBC: What is your business vision for the future?
NB: I think the future is bright for British sports cars. Demand for most old cars tends to drop off sharply when the generation that first admired them is no longer a major market force. Model A's don't command anywhere near as much as they did 20 years ago, for instance. But the Brits may be different. The generations will turn over and change the demand somewhat. Twenty years from now, people will be restoring Miatas. But even members of the younger generation, people who never saw these cars when they were new, fall for them. When they see a Jaguar XKE, for instance, they are just as enamored as their parents were. That's an amazing thing about the attraction of British cars. They'll probably never lose their appeal.

Now that Michelle is officially on board, it is her goal to appeal to the next generation of owners; sticking to the true British classics, but also expanding the offering to what the market deems desirable, we are working with a client on pursing an electric conversion in an early model Triumph. To keep the thrill of the British Sportscar alive! These classics are still as cool as they ever were, and maybe even cooler in this era of economical, environmentally friendly, hopelessly boring cars. They continue to maintain a hard-core--even rabid--cabal of fans who wouldn't drive anything else--at least on weekends and preferably not very far from home.

LFLBC: What is one thing you want people to know about Northshore Sportscars?
MBN: Our sportscars, which cover a broad budget range, are well suited to first-time buyers as well as sophisticated collectors who appreciate quality. We enjoy educating our visitors on the finer aspects of different makes and what ownership will be like.

OK, maybe two things, no project is too large or too small! Keith Pickard, our Chief Technician had over 30 years of automotive experience in his home country of Scotland before immigrating here the United States, where he has since become a citizen (2013). He has been with Northshore Sportscars since 2001 and is frequently call The Wizard. Keith has a passion for vintage automobiles both on the track and off. He says “these are the cars I grew up with."

LFLBC: What has been your greatest business initiative?
NB: Becoming an Authorized Morgan Dealer 2001. After submitting dealership information to Morgan, we became authorized 5 years later when they decided to expand their North America presence. https://www.morgan-motor.com/about-

LFLBC: What other local businesses do you work with?
MBN: As many as we can! We've just joined the LF/LB Chamber of Commerce. Most recently we've worked with Auto Interiors & Design, Shaded Days, Inc. of Lake Bluff and Gifted in downtown Lake Forest.

LFLBC: How do you give back to the community?
MBN: We are regular supporters to the American Cancer Society’s Relay for Life. Patti (my mother) is a cancer survivor.

LFLBC: Is there anything else you'd like to share?
NB: The car club culture is alive and well. We are supporters and members of the FuelFed car club which became the originator of the monthly Sunday morning Coffee & Classics ® https://fuelfed.wordpress.com/coffee-classics-what-is-it/ . There was an event April 14, June 16, and an upcoming one November 3 in Lake Forest.

MBN: AND last but not least, we are happy to be assisting in the coordination of the inaugural Lake Forest “Then & Now”Auto Show on October 13. The show will be celebrating a century of motorcar excellence and we expect 100 premier cars of the North Shore to be on display.