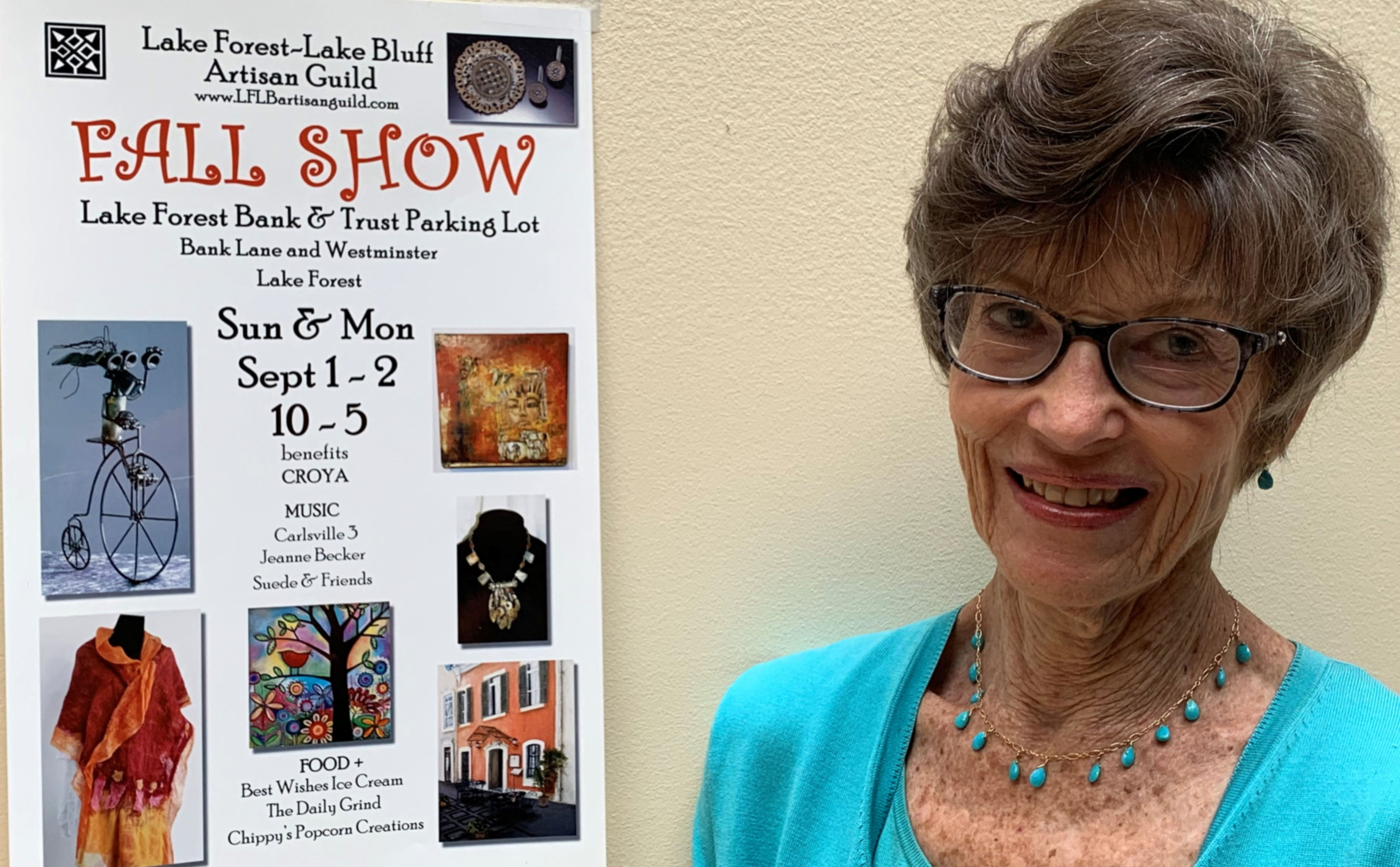 Lake Forest/Lake Bluff Chamber of Commerce: What was the inspiration behind forming the Artisan Guild and what is your involvement in the organization?
Sandy Noble: There were five of us artists initially, all with different skills. We had a couple of jewelers, one gal who did glasswork, one gal who did knitting and fabric. We wanted to create a place forlocal artists like us to show their work. And our mission was to give back to the community.

Shortly after we formed, fifteen of us did a show at the old history museum (behind the library). We were hoping to raise enough money just to pay the $150 the maintenance fee. But, we ended up giving them a check for $1500! So, that was the start of it all...the first show we ever did. After that, we did shows for a number of years at the Gorton Community Center. Then, we were fortunate enough to talk with some people at Lake Forest Bank, and since then that's where we’ve been for the Labor Day show. They have been so wonderful about giving the space and letting us use their name. That's really been a nice relationship.

LFLBC: Tell me more about how you give back to the community.
SN: Whenever we do a show, we always donate a percentage to a community organization. CROYA is the recipient of the Fall show. Mother's Trust has always been the recipient of our show in November. We also used to do a spring show, but we haven't done that in a couple of years.  After our first 10 years we had given $76,000 back to the community, and by now that’s probably up to about $90,000. That's not too shabby for a little group of people.

Also, the CROYA kids have always been involved in helping with the Fall Fair. We provide them space to show their work, and those young artists can see what it’s like to do a show. Plus, they help our artists set up, and take down their tables, and then during the show they do games and face painting for the smaller kids. So, through us, they are giving back to the community too.

LFLBC: What is your vision for the Artisan Guild?
SN: We don’t plan to change much because we’re not really looking to get bigger. We’ve got a great space for the Fall Fair, and we've got our November show at CROYA. We might think about doing another show in the spring again.

LFLBC: Which local organizations do you work closely with?
SN: Well, I’ve mentioned Lake Forest Bank & Trust and CROYA, but we also have Daily Grind sell lunch items at the Fall Fair we have a local jazz band there as well. We’re also connected with many of the other local arts organizations through the Chamber and ArtsLink.

LFLBC: Is there anything else you’d like to share?
SN: We feel like we’ve hit a nice point on the community end and we’re having fun. It’s really a great feeling to provide this forum for artists, and to contribute to the community the way we have been able to.  We look forward to seeing everyone at the Show Labor Day weekend!