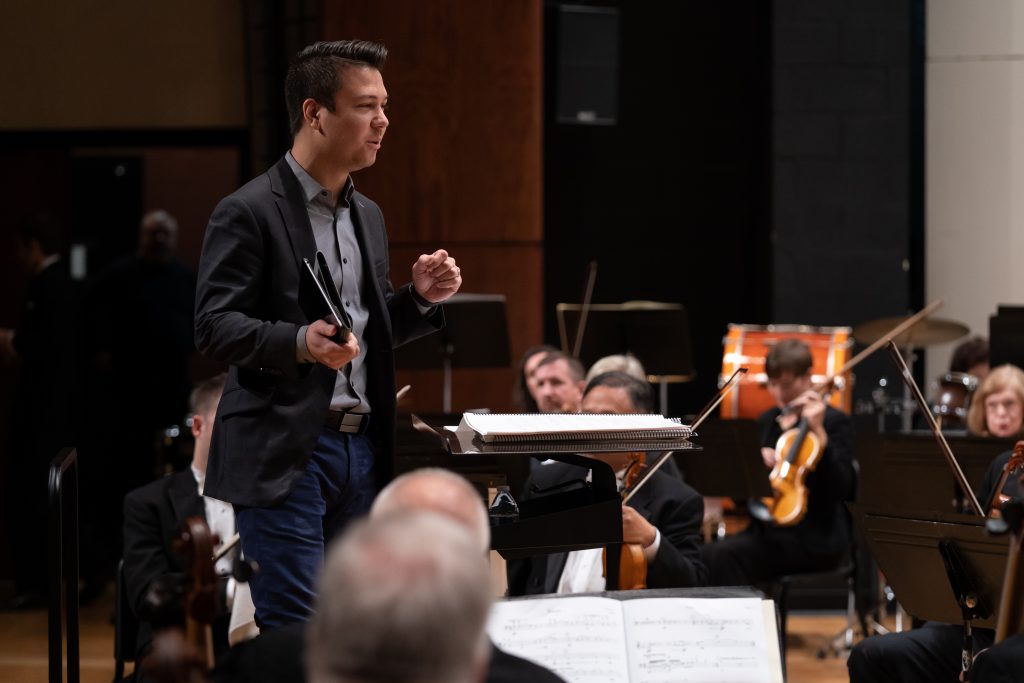 The Lake Forest Symphony aims to foster a community that is enriched, educated, and transformed by the power of music.

Lake Forest/Lake Bluff Chamber of Commerce: What was the inspiration behind the Lake Forest Symphony and what is your involvement in the organization today?

Timothy Corpus: The symphony was founded in 1957 by two gentlemen, Robert Kalter and William English, who were music teachers in town who put together a chamber ensemble. It was just a small group of five to seven musicians, all community members, and by the 1965 there were over 65 players. In 1988, the group became fully professional under the leadership of conductor Victor Aitay. In 2014, the award-winning conductor, Vladimir Kulenovic, became the 7th Music Director of the Symphony.

I joined the staff in 2017, so I've been here for just over two years. I came from teaching percussion at Loyola University, Executive Director of the Hyde Park Youth Symphony and the Education Director at the Northwest Indiana Symphony Orchestra. I left all three of those organizations to work with the Lake Forest Symphony. I have a performance background with a degree in percussion performance and composition but have also worked in arts management since 2012.

LFLBC: What is the Symphony's vision?
TC: It's to provide very high-quality concert music in Lake County, engaging and educating the community with Lake Forest as our hub.

LFLBC: What is the one thing you want people to know about the Lake Forest Symphony?
TC: For the community to know that we're here and who we are. It’s pretty rare to have an ensemble of this caliber in a small town like this with a population of about 20,000 people. Most communities this size don’t have an ensemble that has won the awards that we have, producing Grammy-nominated albums, and has the talented musicians that we have.

The Grammy nomination was in the category of Best Engineered Classical Album for “Liquid Melancholy”, one of our recent albums with music by Composer-in-Residence James Stephenson and produced by Cedille Records. To add some perspective to the category, other orchestras in the running included the Pittsburgh Symphony and winning album was from the Boston Symphony Orchestra! James Stephenson (who lives in Lake Forest) works with many orchestras including the Chicago Symphony Orchestra who recently premiered his bass trombone concerto—and we’re performing the professional premier of his third Symphony in October.

LFLBC:  What has been your greatest initiative?
TC: Well, it’s coming this season—we’ll be moving our performances back to Lake Forest. In 2005, when Barat College closed down, we had to move our performances to the James Lumber Center at CLC in Grayslake. Now, for the 2019-20 season, we will be in Lake Forest [at the John & Nancy Hughes Theater at the Gorton Center] for the majority of our concerts for the first time in over a decade. It’s really important for us to be where our base is. Also, we’re ending the 2018-19 season with a fiscal profit for the first time since the 2013-14 Season, so we are proud of that accomplishment.

LFLBC: Which local businesses do you work with?
TC:  The Lake Forest community has been incredibly supportive of us with in-kind support from The Fresh Market and the Deer Path Inn. The Fresh Market provides food and beverages for all our Salon Series concerts, which are more social events on Friday nights. It’s mingling, drinks, hors d’oeuvres…about an hour of socializing and then music where you're very close to the musicians performing. We’re also thankful to receive generous support from our sponsors Lake Forest Bank & Trust – who is the lead sponsor of our Masterworks Series – and Northwestern Lake Forest Hospital.

Finally, the only way that we could come back to performing in Lake Forest was with the support of the Gorton Community Center.

LFLBC: How do you give back to the community?
TC: We’re a non-profit—so we really are a community organization, serving the community. Last year, we launched the family membership program. So, for all our Masterworks Series concerts, tickets can be free for children 18 and under.  Parents pay the lowest ticket price, and they can bring their kids for free – they just have to sign up for the program. Many organizations have children’s pricing, but we decided to make it free. Special thanks to the Paul Angell Family Foundation and the Palmer Foundation for supporting this program.

Also, we lowered our ticket prices by 25% in 2018, which was a major change that is very rare in our industry. We're really focusing on engagement and making sure everyone has access to our concerts, and we’ve had very positive growth as a result.

Lastly, we’re excited to build our first-ever Lake Forest Symphony Chorus.  That is an important initiative for us in the 2019-20 Season. We’ll be performing Beethoven’s 9th Symphony, which has a chorus, in May 2020.  The Chorus will be made up of more than 100 people, from high schoolers to retirees, and it's a mix of different ethnicities, genders, ages and socioeconomic status. It’s a group of people coming together from local churches, high schools, and community centers from all over Chicagoland. The purpose is to follow the text from [German poet Friedrich] Schiller's poem that says, ‘all people shall become brothers.’ We’re really encouraging the diverse communities of Chicagoland to come together to sing with us. And we’ll be capturing this exciting story through a documentary film that will follow the process.

LFLBC: Is there anything else you’d like to share?
TC: Just the fact that we're excited to be performing our Masterworks series here in Lake Forest again. We hope everyone in the community joins us for our special Opening Night Party in Lake Forest on September 21st. That and the launch of our Beethoven chorus are our two big initiatives this year. We’re looking forward to our 62nd season this fall, and we invite the whole community to come see us.