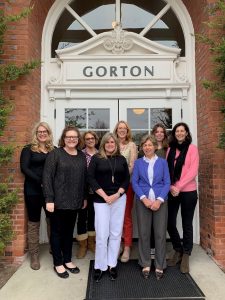 Gorton Community Center is the gathering placed in the heart of our community where people connect, converse, learn, listen, play and perform. It’s also home to Dog Day, coming up Saturday, June 22 from 10am to 12pm…don’t miss it!

Lake Forest/Lake Bluff Chamber of Chamber: What was the inspiration for the Gorton Center?
Amy Wagliardo:  Gorton Center was started in 1974 by a group of local citizens. It came about partly because of the building. The building was opened in 1902 as the Central School, (and changed to Gorton School later), the first K-8 school in Lake Forest, and at that time, the high school was at City Hall. The building was renovated several different times throughout that time. In 1972, they were going to close the school and the city was going to tear the building down. A group of concerned citizens rallied around to create a Community Center--because at the time there was no Parks and Rec Department, there was nothing like this. So, [the Gorton Center] was a city agency for many years and then it was rolled off as its own non-profit in the 2000’s. For many years it has housed the Gorton Drop-In Learning Center. Then in 2012, there was a campaign to raise funds to endow the Center and to renovate it. The theater got a full renovation and reopened in the fall of 2015 with a state-of-the-art cinema system in it.

There was a focus group that came together for ‘the big think’ in 2012 to help determine the elements that people wanted in their community center, and one of the suggestions was film, because there used to be a movie theater in town and now there isn't.  So, that tied really nicely with the major donor of the space. Nancy Hughes [the wife of the late filmmaker John Hughes] gave the largest gift to renovate it. The John and Nancy Hughes Theater has over 300 seats and is now used for dance recitals, children's theater, movies, professional theater productions, live music…you name it. It is used for our productions and also rented out to others.

So today, we have our own classes, films and events that we produce. We are still home to the Drop-In Learning Center, and we have 11 other nonprofits who office here we rent a space for other people's events.

LFLBC: What is the Gorton’s vison? What’s in store in the future?

AW: So we still feel that there are people who live really close to 400 East Illinois that still don't know that this building houses all of the vibrant and varied things that are going on here. Every day we talk to people who don’t know what we have to offer. So, awareness of what we do is always something that we strive to improve so we can communicate our activities most effectively.

Also, because we're a non-profit, 25% of our budget comes from contributions from generous and kind patrons who support us year-over-year. So working to maintain the financial stability of the organization is also a strategic priority.  Because of Gorton's history of reinventing itself and in the 2010’s of ‘relaunching,’ almost like as a start up again, another strategic priority of ours is for development. Our Board is moving from a start-up type board onto more of a governing board. So we're looking at board policies and procedures, onboarding off-boarding, attracting the right people for the board and that sort of thing.

We also have a new priority around strategic programming where we are bringing two to four Signature Events into Gorton every year and then potentially even a larger event. Right now our signature events include our Mountainfilm Festival and Second City.  With that, we’re ramping up our Gorton Producer Program that provides individuals the opportunity to underwrite an event.

Leslie Lord: We’re really trying to be top of mind for people when they want to see a movie, or take a class, or any of numerous things we offer here. We want them to come to us.

LFLBC: What is one thing you want people to know about the Gorton Center?

AW: We’re here for the whole community…we have something for everyone. Our audience is so broad—so we try to reach as many people

LFLBC: What is your most successful initiative?
AW: We’ve added a number of community-centered events that are free or low-cost and have grown every year—like our end of summer block party and outdoor movie.  People love our Dog Day which has been around for a long time and different forms. We’ve had a PAWS adoption day; we recently did a blood drive; we do the Kids Only Holiday Shop. We love our events that really bring the community together. Like ‘Home Alone’ the day after Thanksgiving--everybody laughs, and it just fills you up.

LL: And many of the other events that we have here do bring the Community out. It just really feels like this great Community, and its familiarity.

AW: People really do come together at Gorton.

LFLBC:  What other local businesses do you collaborate with?

LL: Oh, there are tons.  Deer Path House, Maevery, Market House, The History Center, the Library, Open Lands, ArtsLink, Lake Forest Bookstore, CROYA, Lead, the Community Church…all the vendor’s that do the Kids Only Holiday Shop…Gifted, Kiddles, Initial Choice…there are so many.

LFLBC: How do you give back to the community?

AW: Well…that’s our main focus in all that we do. But we also collaborate with other organizations’ events—we donate to auctions and fundraisers. We want to be part of what's going on in town. We feel that is what will keep Gorton relevant -- to have our tentacles everywhere connected to everyone else. I feel like it only makes the pie grow larger.